For the first time in a very long time, a photograph of a car is not on my front page. I rarely take “these sort of photos.” I’m a New Yorker, and I leave the skyscraper gazing to the tourists. However, the Empire State Building was going to be lit up in gold that night in honor of my alma mater, Pratt Institute’s 125th Anniversary. I didn’t even want to head into midtown because it was pouring rain, but I had promised a former classmate, Dawn Arnold Diamantopoulos, that I would get a picture for her because she now lives in Indiana.

So I gathered my gear and an umbrella and headed in. I didn’t take many photos;  I had to wait awhile for a torrential downpour to slow down, then I had to wipe raindrops from my polarizing filter after every shot. It was a very soggy process. Eventually I was happy with a few shots that weren’t ruined by a wet lens, and hurried back home to be warm and dry.

I quickly processed the shots and tweeted a few, then uploaded three to flickr. The next day, I noticed that the Pratt Alumni page posted an update with a call for people to post their photos of the Empire State Building lit up in Pratt gold. Everyone uploaded very sexy Instagram shots, so I just posted my link to the flickr set.

I expected nothing of it other than a few “likes” on the Facebook comment. A few days later, however, I heard from someone at Pratt – could they use one of the shots for Prattfolio, the Pratt magazine? Sure, why not.

This past Thursday, the same day the Prattfolio arrived with the photograph featured on the back page, I received another email from Pratt – Dr. Tom Schutte, the school president, has selected my photo for his holiday card – could they use it? Well – sure.

I’m glad that I loaded up the gear and headed out in the pouring rain. As a fellow photographer commented to me – “It’s a good reminder that we can’t get these images by being lazy.” I’m making two photographs of the Empire State Building lit up in gold available for sale on Red Bubble. Both are available as prints and cards. So HEY, you can be like the Pratt president, and have Empire State Building holiday cards! 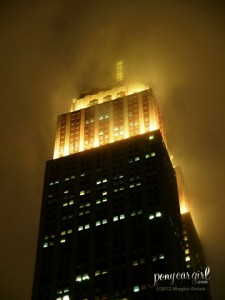 Click here to leave this site and browse “Empire Gold” on Red Bubble.com.